I am broadly interested in the ecology of species interactions and how trait diversity shapes community structure. My research focuses on how plant chemistry mediates interactions with herbivores and natural enemies in a spatial context. I am investigating the factors that maintain chemical variation due to abiotic and biotic heterogeneity. And in turn, whether variation across the phytochemical landscape changes the dynamics between herbivores and natural enemies.

Interactions between phytochemical diversity and herbivory

The phytochemical landscape is a crucial and understudied aspect of plant defense across temporal and spatial scales.  Variation itself has been hypothesized to be a powerful mode of defense against insect damage across the landscape because chemical variation within host plant populations are difficult for insects, a major assumption of the Phytochemical Landscape Hypothesis.  I work with the neotropical shrub, Piper kelleyi, to test this hypothesis.  Are tropic interactions contingent upon their spatial location? Is this correlated with phytochemical diversity?  Understanding the role of defense mosaics across the geographic landscape will contribute to our understanding of biodiversity.

Phytochemical diversity is hypothesized to be a major component predicting herbivore preference and performance. The Associational Effects Hypothesis posits that plant neighbors having dissimilar chemical traits are difficult for females to select a quality host. I work with the Solanum pennellii introgression lines and the tobacco hornworm, Manduca sexta, to test this hypothesis. Plant chemical traits are experimentally manipulated and moth preference is assessed using a series of insect flight, lab, and field experiments. Understanding the role that chemical traits have on insect colonization will provide insight into specific chemical cues attracting oviposition. 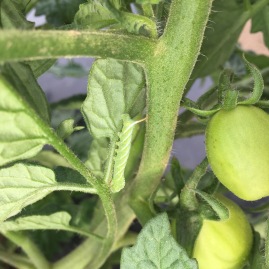 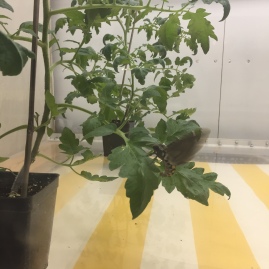 Insect pests can severely harm crop production.  Many agricultural researchers have proposed that a key ecological strategy for sustainable pest management is increasing plant biodiversity on farms, but the phenotypic traits influencing damage reduction remains unknown.  I am examining the role of diversity in plant odors and how combinations of odors emitted by neighboring plants influence the search behavior of colonizing insects.  The goal of this research is to discover how odor diversity influences colonization by insect pests and biocontrol by natural enemies, and to use this information to develop sustainable pest management strategies.

Trophic interactions are hypothesized to be contingent upon their spatial location across a phytochemically diverse landscape. My research has demonstrated that turnover in chemical traits among individual plants is an important functional defense trait in explaining patterns of herbivory in natural and agricultural settings. However, the importance of spatial chemical variation for escape from enemies and plant competition has rarely been considered in the success of invasive plants. A novel direction I will explore regarding biological invasions is to use a mechanistic approach of exploring phytochemical trait differences (i.e., chemical beta diversity) among native and invasive plants at both local and regional scales using the invasive Phragmites and the native Spartina. This research addresses a critical need in the biological invasion literature of how biotic interactions mediated by plant chemistry in the face of climate change can cause differential establishment success between native and invasive plant species.